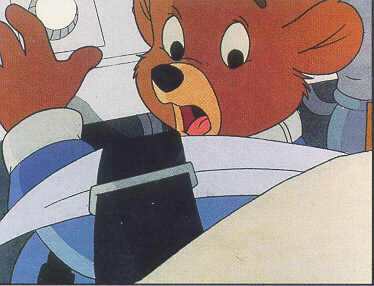 These are just a few screen grabs that I just found. More will be uploaded later. (Please note that all images are copyright 1990/1991 by the Walt Disney Company and are used without premission. The creator of this webpage has made sure that no money was made from the creation of this page and that all material, character's names and captions are used with the upmost affection and respect to the Walt Disney Company and the Tale Spin team.)

Cartogfr.jpg- Kit Cloudkicker is charting a very important point for the Seaduck using his dividers.

A Touch of Glass (Animation by Sun Woo Animation Inc.)

Discus.jpg - Kit Cloudkicker throwing his airboard like he was in a discus competition. He is a track and field star at Cape Suzette school.

artifct5a.jpg - Kit is looking at the cursed idol.

wildcat5.jpg- Wildcat working on what Oscar and Kit believe is a secret Anti-Pirate Weapon.

Pizza Pie in the Sky (Animation by Walt Disney France S.A.)
Other Images that I don't know which episode they come from......
Disney Artwork (Stills)

cdad.jpg - An ad for the Disney Afternoon soundtrrack. Notice how Kit is drawn in this scan.....Hmmmmm...

Special Thanks to Jamie Chan and Debbie Madden for scanning these screen images from the comics......

Special thanks to Beth Bohnert for finding these pictures and Richard Lowman who actually scanned them. 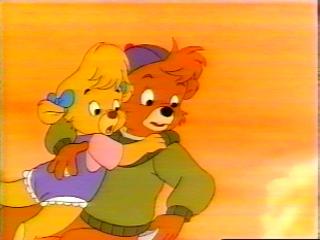 Return to the Unofficial Kit Cloudkicker Home Page
Thanks to 50 Webs for providing space for this webpage. Click here to find out how to get your free homepage and 60 Megabytes of space.