Yeah I got an award. So?

Here are the following updates to the Homepage:

[1.] Mass editing job is in progress at this time. Finished the three TaleSpin Editorial webpages editing; including adding more commentary to them comparing 1998 Me to 2015 Me! Some editorials have been edited as well for clairty and commentary purposes.

[2.] TaleSpin Cast & Crew Pages updated. All TaleSpin tributes are updated as well. Added new profiles to all pages. TaleSpin Connections Page has been revamped and recounted.

[3.] This webpage has been updated as well to include a new loving memory section, new ratings information (more to come later) and erase irrelevent information.

If you want to comment on my rants, editorials, fanfics or anything; please e-mail me at gweagle@eastlink.ca. I will no longer be updating on the High Flight Comment Board since it is a waste of time for me.

This Page is in tribute to the loving memory of:

You will always be there in my heart and be solely missed. May the light shine upon thee! 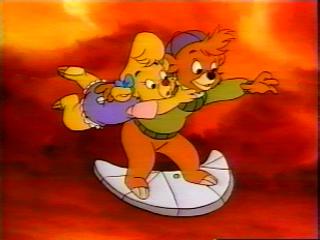 Special thanks to the following people and companies:

[1.] 50 Webs for providing the space for this webpage. I know that I include that on every webpage; but, I just cannot thank them enough.

[2.] Debbie Madden (of Tale Spin Collectiables). She recommended Geocities and gave me the will to create the website in the first place. I created the TaleSpin translations page for her website. (One of my first projects! Sadly; it has disappeared down the memory hole after Geocities terminated their hosting services.)

[3.] Michael J. Gollihue (of Tale Spin On-Line). Most of the pictures and screen grabs you see here are from this website. (He had such a huge website before it disappeared down the memory hole many years ago.) The pictures were scanned by Richard Lowman; who is a huge follower of Production#4306. (TaleSpin's code number according to Walt Disney Television Animation.)

[4] Tabias of Otters for the Unofficial Kit Cloudkicker Homepage Logo.

[5.] OpenOffice; who still has the best WYSIWYG webpage builder in the business. And myself for learning some basic web coding in case something needed to be edited and OpenOffice kept messing it up.

[6.] Jymn Magon, Mark Zaslove and the TaleSpin team for creating one of the greatest animated series in US history and one of the top five animated productions in the world.

[7.] Kit Cloudkicker and R.J. Williams/Alan Roberts (The voices of Kit). (I've saved the best for last!) Without them; I don't think Tale Spin would have been as good of a production as it was. He *is* a character with attitude and a heart to match; I just wish other child characters could express it.

[8.] And finally...Everyone who has supported the website throughout the last 17 years or so; and everyone who put the pressure on me to restart the website on 50Webs after Geocities' hosting service was terminated.

Special thanks to 50 Webs for providing space for this webpage. Click here to find out how you can get your free homepage and 60 Megabytes of webspace.