Disclaimer#1: All images and characters are copyrighted 1990/1991 Walt Disney Company Inc. and are being used without premission. The webmaster has made sure that no money was made in the creation of this page and all material is used with the upmost affection and respect to the Walt Disney Company and the Tale Spin team.

Disclaimer #2: The following is an editorial about Rebecca Cunningham. The views expressed here are of my own and does not mean that you actually agree by it. If you have any comments relating to this editorial or any other editorial created by me; then E-Mail me at: gweagle@eastlink.ca 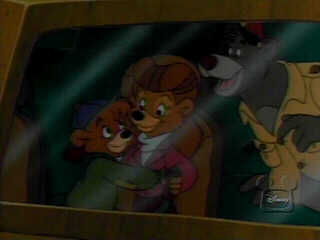 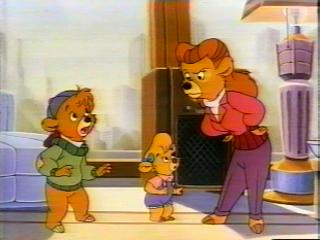 Although my favorite character is Kit Cloudkicker; I do have a real soft spot for one of Disney's best female characters. Unlike Gadget from Chip and Dale's Rescue Rangers who is more or less a genius; Rebecca is a symbol of the continued struggle for women equality in business and plays a bigger role in the heart of Tale Spin. She has the toughness of a corperate owner but with all the qualities of a caring single mother. Although as a rule of thumb; Baloo and Rebecca cannot agree with anything expect on two characters: Kit and Molly. Its a very rare dymanic that can only happen in TaleSpin and its proven time and time again with each episode.

Rebecca At A Glance.

Name: Rebecca Cunningham
Possible Names: Baloo (and to a lesser extent Louie) usually calls her Becky, Beckers, Boss Lady, Brown-eyes and even Miz Manager (Rebecca usually hates being called that.."and the name's Rebecca; not Becky."). Kit called her most of the time; Miz. Cunningham (which she likes to be called more due to that formal attitude she has.)
Age: Late 20's; early 30's
Height: About 5' (Disney never gave an exact age or height)
Friends: Baloo Bear, Rebecca Cunningham, Molly Cunningham, Kit Cloudkicker, WildCat
Rivials: Don Karnage, Mad Dog, Dumptruck, Trader Moe
Likes: Businesses, Selling, Discpline, her daughter Molly and her "son" Kit.
Dislikes: Poor Manners, Incomplete Results
First Quote: "Well; the way you treat your customers ; no wonder this business is failing."- Plunder and Lightning Part Two
Most Memoriable Quote: "No; that a good picture of you looking stupid"- A Bad Reflection on You Part One
Weaknesses: She sometimes goes too far in doing it "by the book"; Money and Clients (Kit is better in exposing this weakness than Baloo is.)

Most of the time; she wears a red turtleneck sweater; a white shirt underneath (similar to Kit's) and purple pants (different color purple to Gadget's pants). Sometimes she wears a purple/grey overcoat when the weather gets cool.

The Two Sides of Rebecca 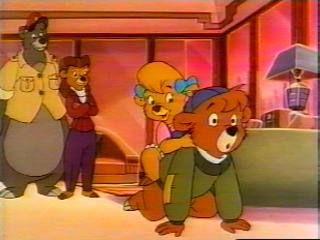 No matter what people might tell you about how they feel about businesses. Business is a "cut-thoart" thing and in order to be successful; you sometimes have to have that "tough love" in this world. And Rebecca Cunningham has that quality. It's when Rebecca steps over the line between being a stern business person and being a "bully" that it ultimately causes problems. However; remember that Rebecca has a dream as well; like Kit Cloudkicker having a dream of being the greatest pilot in the world, Miss Cunningham's dream is to become the greatest businessperson in the world. Prehaps the biggest victory she can obtain if successful is a rise in statue for women. If there was a major problem with Rebecca is that she always wants to find some quick ways of getting rich; she comes up with theories that she thinks will work in real life. Some examples of her "get rich quick" schemes included episodes like "A Fuel Dollars More" , "The Bigger They Are; The Louder They Oink" and "A Touch of Glass". All three seemed in theory according to Miss Cunningham to be a way to increase her 'profit margin' and expand the business further. However; there is an old saying in the world: "Nothing really works in theory. It's when it works in real life that counts!". Sadly; her schemes should've included warning labels and she often doesn't listen to anyone until it's almost too late. (Like nearly getting cooked into soup in "Louder They Oink"; or losing Baloo's plane in "A Touch of Glass".) And many times; it almost causes the end of friendships ; particually Baloo and Louie Lamount. It's a simple case of letting your business sense getting in the way of common sense. And even after admitting that she is wrong; she often falls back into the same trap.... its a good thing that Baloo and Kit (more so than Baloo as it was shown in "It Came From Beneath the SeaDuck ) are more forgiving to Rebecca and that's because of the second side. Rebecca's biggest weakness is money and she'll do anything to expand the business; such as ask Baloo for a date in "My Fair Baloo" (even though Baloo is considered by mild terms according to Miss Cunningham to be a slob.) or even be talked into letting Oscar Vandersnoot ride in the SeaDuck in Captains Outrageous. (Even though that is againest her better judgement as a mother. Strange that the last two examples; it was Kit who talked Miss Cunningham into this. Proves Kit isn't a volient person either.) 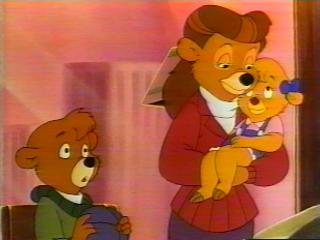 The Loving and thoughtful Mother (Molly Cunningham and Kit Cloudkicker)

Now you may be thinking that Rebecca Cunningham is a "heartless" person; however, nothing could be further from the truth. She represents besides the future of women; the sensible, detail-oriented, "play-it-safe" figure who knows the meaning of making a living and missing the big picture. She is also a single mother; who is rearing a high-energy female bearcub; Molly. Trying to run a business and still caring about Molly is not an easy thing to do; and sometimes Rebecca can get so caught up in the business of running Higher for Hire that she forgets about Molly and Molly often gets herself into trouble. ("Mommy for a Day" is the best example along with "The Incrediable Shrinking Molly" and "Molly Coddled".) Rebecca proves her heart and love for Molly when she would do the most insane things (according to Baloo) like try to do Kit's cloudsurfing thing; however in the end Rebecca and Molly do get back together. Whatever happened to Rebecca's husband/Molly's father is still unclear; however, two theories do come up: In the Tale Spin bible (extracted from Jymn Magon); there was something that said that Rebecca is a widow (That's why I wrote the story "Unforeseen Impact" on my Kit Cloudkicker Fanfics page.) while others believe that Rebecca and her husband seperated from each other. (Although it was spoken in the pilot; I wonder if she's really right about that. Jymn Magon has joked that maybe Rebecca's Husband ran off with Goofy's wife. Only rumors!) Although Rebecca is a stern person; she's trying to protect her child from danger; like any normal mother should. She has no choice in this...

...however; Rebecca's heart goes even deeper than this. When she took over the business at Higher for Hire; even she had no idea that a small bearcub would be friends with someone like Baloo. Rebecca has a real soft spot for Kit Cloudkicker. She turely loves Kit; as if he was her own son, and almost loves him to the point that he is the second coming of her husband. For some strange reason she can see through Kit's tough-guy charm; even when Baloo doesn't. (Plunder and Lightning Part Three). Rebecca can also be a compassive character as well. In Plunder and Lightning Part Two; Rebecca sang the lullaby to Molly known as "Home is Where the Heart Is"; this sence was thoughtlessly cut off by Disney for syndication and it spoke volumes about Rebecca's real character. Just after she sang the lullaby; she notices Kit at the window. (Notice that Kit is very close to actually crying himself., he's been down in the dumps for too long.) Without letting on that she's seen him (Very clever move againest a 12-year old kid who is still clinging to his tough-guy routine. Great sense of character here.); she picks up the cookie jar and slowly strolls over to the window, singing the last verse again indirectly to Kit; opens the windows and places the cookie jar on the sill as Kit hides. This is a prime example of Rebecca's compassion; going out of her way to make a loving gesture to a boy that she only knew for a day. Prehaps; Rebecca knew all along without actually Kit about his past that he was a troubled youth. Prehaps the symbols like the patched-up green sweater; the defensive attitude he shows towards Baloo and his preformance in Plunder and Lightning Part Three with the Air Pirates convinced that this kid needs a real home and she was willing to provide him that as long as he works. (The good news is that Kit does understand the meaning of hard work and is willing to do that.) Rebecca ; like a ture mother that she is, is always willing to defend children's action and Kit is no expection. She prehaps saw right through Kit's betrayal sence in Part Three of P&L and believes that Kit was trying to save them. (And why not? Kit is the only person known in TaleSpin to ever betray the Air Pirates and who knows how the Pirate tick better than Kit?) Unlike Molly; she chose to love Kit and it was the right choice; otherwise, Kit proably would have left for good when the first problem came up.

Prehaps the ultimate show of heart from Rebecca was in the episode "Her Chance to Dream"; the most emotional episode in the entire series. This episode focuses on a ghost captain who tries to woo Rebecca into joining her and giving her the happiness she had been denied for so long.... When Baloo and Louie try to stop her and the ghost; Rebecca goes completely beserk; accusing Baloo and Louie of being heartless and not caring about her desires and dreams. (Prehaps like Kit; she had a second dream: to be in love with a pure-hearted man; like his husband might have been.) However; when Baloo explains that her decision to join the ghost would have a huge impact on her daughter she started to realize what example she was giving; since her husband was gone; who would take care of Molly; the only known relationship to her... Her choice was clear and correct; she couldn't join the ghost and with the most emotional sence in WDTVA history (believe me; its so emotional that it seems that Disney has cancelled this episode on Canada's Family Channel. Again; dulling the emotional impact of the series.) defeated the ghost and ending the dreams. Although she had many regrets of doing what she did in that episode; shown by her uncontrollable sobbing; she realized that it was the *right* decision.. even if Molly is annoying; that is pure heart that other shows before and after TaleSpin couldn't achieve. I just don't understand why people are making such a big deal about Gadget Hackwrench. Yes; it's ture that she breaks the stereotypes of the model "geek" sciencist and "freak" inventor. (and there's nothing wrong with that.) However; Gadget never really convinced me that she's the better female character. Maybe its because Rebecca represents a more realistic view of women and she isn't that cute and sexy; she wasn't designed that way. And one more thing: Has Gadget ever tried to slap around a gaint squid like Rebecca did? (Don't ask about why or how that happened; watching "It Came From Beneath the SeaDuck" and see it for yourself.) That's my opinion; I welcome yours. See you next time!

Special Thanks to 50 Webs for providing space for this webpage. Click here to find out how to get your free homepage and 500 Megabytes of webspace!