Return to 50 Webs. Disclaimer: All opinions expressed here are of my own and may or may not be the opinion or opinions of the reader and/or viewer. You may leave comments about this and future editorials by E-Mailing me at: gweagle@eastlink.ca or signing the Kit Cloudkicker guestbook.
Jymn Magon's Spin on Kit Cloudkicker
And on Tale Spin. 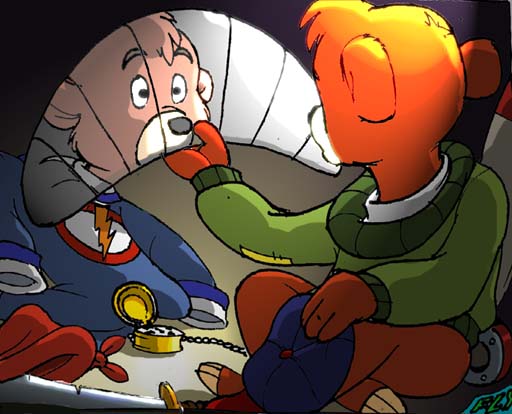 Special Thank You to Jeffery Mika for the picture above.

Many times it is great that people do respond to people's editorials or even websites for that matter. It is even more special if one of the co-creators of Tale Spin visits your site; signs your guestbook and even responds (negative or positive or netural.) to the content that you worked so hard for. That is what has happened here. A couple of weeks ago; Jymn Magon (co-creator of Tale Spin) visited my website and gave me a pretty interesting look in his eyes on how he modelled the "Prince of Darkness" to boot. In many respects; I do agree with him. Besides the lanauage; he has shown that he is a better producer than writer. (Even more dangerous if he's with Mark Zaslove.) Here is the portion of the E-Mail message that he sent me a couple of weeks ago:

Gregory -- Just visited your site and read your editorial.  Some very good ideas there!  I thought I'd make a few comments that might be helpful (and correct a few misconceptions).

>> Possible Names: Kit is techinally the shortname for Christopher. (Although Disney never used Kit's long name at all.)

We never viewed him as anything but Kit.  The name Christopher never entered my head.  Kit was actually a never left over from the Rescue Rangers development.  Before Chip and Dale, there were two mice name Kit Colby and Colt Chedderson.  When they got tosses, I resurrected Kit's name.

I don't think we ever nailed that down, but it sounds about right.

>>If there is one memoriable thing I remember about Kit Cloudkicker; it's the thrill I get everytime he takes that tow rope from the Sea Duck. Holding onto the

tow rope; Kit falls out of the Sea Duck and reaches under his green sweater for a steel; boomerang-shaped board.

Glad this image resonated so strongly.  A drawing of Kit on a tow rope (done by development artist Bob Kline) is basically what caught everyone's attention and helped sell the series.

>> With a flick of the wrist; the board opens with a click and he places the board under his feet. After he staightens up and begins to bend his knees; the fun really begins.

I'm not sure how it happened in every episode, but the intent was that Kit pushed a button that sprung the board open, not a writst flick.  The board is sort of a spring-loaded steel coissant!

Our interpretation of the Kit-Baloo-Rebecca relationship is based on the Mowgli-Baloo-Bagheera relationship.  The boy is torn between two diverse parental figures.  One is the carefree male (Baloo), and the other is the caring but careful female role model (Rebecca/Bagheera).  Parentless, Kit symbolizes every child's search for stability and emotional balance.  Baloo and Becky live at opposite poles, and between them they create the balance.  They feed Kit's need.  On the other side of the coin, Kit feeds the parental figures as well.  He is the son Baloo never had (and probably never will).  However, there's more to fatherhood than "showing the kid a good time."  Baloo has to learn commitment -- something that's totally alien to him.  Becky already had a child to mother, so Kit represents something else.  Possibly the lost male figure... of her husband???

Becky and Baloo, in turn, symbolize something for each other.  Baloo helps break down Becky's stuffy barriers and teaches her to be more friendly.  Becky helps give disipline to Baloo with her business background.  It irks her that he can do what she can't (fly), and it irks him that she can do what he can't (run his business so well).  It's a love-hate relationship like Sam and Diane on CHEERS.

>> The very first time was when he mentions his name to Baloo and Rebecca. He gives it as "Kit.....Cloudkicker,"; with an odd hesitation and a slightly dubious expression. It was strange to say the least; I began to wonder if Cloudkicker was even his real "last" name. But it is the only name he gives and maybe the only name he has.

There was nothing tricky here.  In our minds his real name IS Kit Cloudkicker.  I know it sounds a bit odd, but it was fashioned after Indian names like Luke SKYWALKER.

>> If Jymn Magon was allowed to get away with it (although he would deny it); I wouldn't have too surprised if Kit put the grappling-hook right through a pirate. He's got such a dark mentially; and if Baloo didn't come to help him, I don't think Kit would have lasted very long.

Interesting theory, but, no, I don't think I would have shot a pirate with a grappling-hook.  (Though Mark would have!)

>>To me; Baloo was more than just the seller to this series. (Tale Spin is a spin-off to Disney's version of the Jungle Book.) Baloo was what I call the heart and soul of the series that would rub off onto the other heroes of Tale Spin.

Absolutely.  Sorry to say, but the series was first built around Baloo.  He was part of a series I was trying to sell called "B Players".  When that development got killed, I wanted to keep him, because he's just such a great character.  (A lazy ass who has to learn responsibility.)  So I welded him onto an old Duck Tales idea we once had about an air cargo service.  Kit evolved naturally as the important thing that Baloo cared enough about to get off his fat butt.

>>When Rebecca first appeared in Plunder and Lightning Part Two; there were signs that Kit did in fact at the very least respect women. Rebecca seems pretty excited when she asked Kit to introduce himself and afterwards when Kit had Molly on his back running around her. Kit also seemed to act like a perfect gentlemen.

As an orphan it would seem natural to me that he would gravity toward a mother figure without much hesitation.  Becky & Molly represent (instantly) a sense of family.  That's Kit's dilemma.  He's torn between the carefree, footloose, trust nobody life of Baloo... and the warm, "I'm safe", stability of the Cunninghams.

>>Although the song "Home is Where the Heart Is" was cut from the syndicated version of Tale Spin. (Yes there were two versions of Plunder and Lightning made) That lullaby served to be the turning point of Kit's life.

Yes, even tho' most ballads are ponderous in a cartoon, we felt this song was important.  It was the turning point for Kit.  With the cookies on the window sill and the lullabye, this was Becky's invitation for Kit to become "part of the family."  Heady stuff for a homeless urchin.

>> (With WildCat as an uncle; I've never seen Kit and Wildcat enough to form an opinion about trust at this time)

>>I know that this sounds strange; but I love Molly Cunnigham.

And you should have seen the little girl that did the voice!  Even cuter than Molly!

Gummi (from the Gummi Bears)...

No, I don't see a similarity at all.

>> ...and the amount of bashing from a certain person (who shall remain nameless.) has many a Tale Spin wonder ponder this one question: What the use of having a character like Molly in this wonderful show? First of all; I'm going to make a dangerous statement: Molly is the best "filler" character in Disney Television Animation.

"Filler", maybe.  Cute, definitely.  But what's her role?  Well, putting aside her personality, the little girl represents the soft side of Becky.  Without a child, Rebecca would just be a hard-nosed business woman who gives Baloo a hard time.  Were she a man, this would be a strong, "alpha" type personality.  But since Becky is a woman, the description would be altered by most people to just a "bitch."  So we needed to soften her image, and the "single parent" angle did the trick.

>>If only Disney would give Kit Cloudkicker another chance.....

It's a funny thing --something I can't put my finger on-- but Tale Spin was never really embraced by the Disney organization, despite its popularity and ratings.  In fact, I almost sensed there was an unspoken movement to downplay the show.  Oh well, chalk it up to my paranoia.

A few extra notes; and why did I do this. It's interesting to see that there are a few people is this world who create these beautiful creations still care about them years after their release. The last statement was in my view; is something that I share as well. I felt that Disney never wanted this show to air in the first place and the only reason why they approved it is because Disney basically ran out of ideas. And why did Disney "hate" the show? It simply didn't fit their image; and that's why many people today like it. The show itself had a soul like the characters that it represents. It was based on quality; not on popularity contest.Speaking of popularity: Tale Spin never really gained popularity until 1993; the same year that I watched the show on a regular basis. Although I would like to see it back on Disney Television Animation/syndication television; however, since Disney's stance is basically againest such a move I don't think that will be possible.

To end my editorial; I would like to comment on Disney's new series Hercules. For the first time I was able to watch a 22 minute episode and actually like it. It may not be as original as Tale Spin; but it does have some spunk, some very good comedy and a fair bit of drama as well. However; we shouldn't have expected anything less from Tad Stones. He is a great producer after all. So far; the show is great although the artwork and animation do need a fair bit of work. (It's not nearly as bad as 101 Dalimations; so at least Disney's is coming back in that area too.) What I would like to see is if Mouseworks can be a smash hit (in quality). Although I've heard some horror stories about it; I would like to see it in motion. Finally; there's a rumor that a furry TV series is coming in 1999 on prime time. No details have been announced; however, it will be quite interesting.

Could it be Tale Spin 2? Forget it! Disney says the show is over and done with; however, a 21-year old boy can dream can't he? Just like my buddy Kit! That's my opinion; I welcome yours. See you next time........ 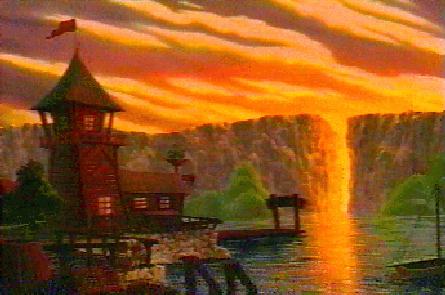 Return to the Editorial Index
Return to the Unofficial Kit Cloudkicker Home Page
Disclaimer: All Images and Materials are (C) 1990/1991 Walt Disney Company and are being used without premission. The webmaster has made sure that no money was made in the creation of this webpage and all material represented here is used with the upmost affection and respect to the Walt Disney Company and the Tale Spin team.
Special Thanks to 50 Webs for providing space for my webpage. Click here to find out how you can get your free homepage and 60 Megabytes of webspace.