Return to 50 Webs.
Disclaimer#1: All images, characters and material is (C) 1990/1991 Walt Disney Company and is being used without premission. The webmaster has made sure that no money was made in the creation of this webpage and that all material used here is used with the upmost affection and respect to the Walt Disney Company and the Tale Spin Team.
Disclaimer#2: The views expressed here are solely the views of the webmaster and no one else's. The webmaster has no intentions to change anyone's minds about a particular subject and respects the views of the viewers. Comments about this and other editorial can be E-Mail at gweagle@eastlink.ca or signing the Cloudkicker guestbook.

Two years; where has the time gone. The TaleSpin fan base has gone into a different direction; with fewer fanfics and more fan artwork being made. I personally believe that the fans of TaleSpin have spoken about the show and Disney's mishandling of the series; but I'm not going to bash the company anymore unless it is really offensive to a person's intellegence which pretty much explains Toon Disney's recent TaleSpin commerical. The new Baloo's voice is terrible and using a real kid who does little more than squeal and scream at the sight of Baloo antics was fairly insulting. Enough said about that....

And for the second time this year; I never got everything that I wanted to get done. Although I did finish Part Three, Chapter 2 of "Terror of TerraStone", and pretty much completed the TaleSpin Voice Talent Tribute (Although I still have Phil Crowley's profile left to do.) I still haven't completed the editorial/profile for Baloo (Laura Trombley going to be all over me.); and for WildCat. Baloo's is 80% complete; so I can get that one done. WildCat is on hold. "Unforeseen Impact" and "Rebecca's Diary" have completely stalled and I'm stopping work on them pretty much forever: I'll never get them done! (I might work on them still.) I've started work on the "AeroStars: A TaleSpin Prequel" in which the Introduction and about half of Chapter One are progressing nicely. I also have at least another four editorials in the works and one for Eopinions.com for the TaleSpin Video 3: Jackpots and Crackpots. So that's the timetable right now; a complete mess. The R.J. Williams page is complete now; unless I get more information. So some progress has been made. I plan to work on this throughout the summer (expect on July 19th due to my fishing trip and July 29th due to the South Shore Big EX); and this editorial will be the start of my work.

To end my editorial; which has been written in haste; I read Nina Adams and most recently Erin's post of the TaleSpin High Flight Comment Board and its made me feel that TaleSpin has done something that no other cartoons has been able to do well. When I said that TaleSpin is POWER! (One Year of Cloudkicking) I meant in the sense that the show; no matter if people hated it or not; would come out and say that 'It made an impact on me.' then the creator's of this series have really made something that very few if any can ever top. The show made on impact on everyone: Ted Heinz stated in an earlier post that he didn't care about flight until he watched TaleSpin and of course everyone knows about his love for Kit. Joesph Greenlee felt that Kit Cloudkicker was someone has can relate too. (TaleSpin: A Personal Oydessy) Reading from Nina Adams website (The person who wrote a number of stories for this website); admits that it made a huge impact on her to the point of writing a live-action version particually the first episode "Plunder and Lightning" which made a huge impact. Alyson Terry's editorials really touched onto the heart of what TaleSpin is about: It wasn't about selling Baloo or spinning-off the Jungle Book; it is about the ability to write stories that are beyond belief. To me TaleSpin made the impact of helping me write editorials and stories. I used to be a math wiz; an objective person. However; the spirit of a person is found not on cold objectives; but on the compassative subjectives that story-telling, character design and heart. TaleSpin is #1 in all three areas. And it will never happen again in a world where market share and political correctness rule over creativity and ture freedom of expression. (I know that there are limits to freedom; but we already have enough self-inflicted limits as it is.) Hopefully; in the world of Pokemon and Pokemon clones (Digimon, Monster Ranchers etc.); sick comedy cartoons (SpongeBob Squarepants, CatDog etc.) and overcute characters who sound like 'I've got a gun' like the Teletubbies is getting now; someone in the entertainment industry will say enough; and look back at shows like TaleSpin, Neon Genesis, Gargoyles, Reboot and Batman: The Animated Series; and realize that storytelling, heart and character design will always win over animation, music and the ability to make money off commericalism and comsumerism; which are at best taken in small does.

Maybe one day it will happen. Maybe..... However; we TaleSpin will not worry about Disney's lack of respect for TaleSpin; we will always continue the dream and the power of the mythicalogical heroes of the spin. Because there will always be another Tale to Spin; and we will always win it if we Spin It! That's my opinion; I welcome yours. See you next time.... 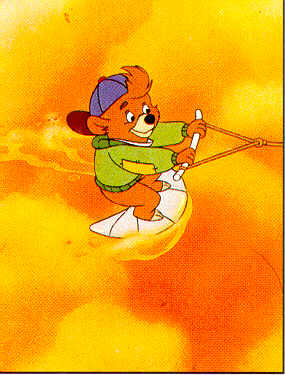