Disclaimer#1: All images and characters are copyrighted 1990/1991 Walt Disney Company Inc. and are being used without premission. The webmaster has made sure that no money was made in the creation of this page and all material is used with the upmost affection and respect to the Walt Disney Company and the Tale Spin team.

Disclaimer #2: The following is an editorial about Kit Cloudkicker. The views expressed here are of my own and does not mean that you actually agree by it. If you have any comments relating to this editorial or any other editorial created by me; then E-Mail me at: gweagle@eastlink.ca

Editor's Note: Before I begin; I would like to note that a lot of the inspiration and a good chunk of the material that was written for this editorial was based on another editorial written on September 28th, 1996 by fellow Kit Cloudkicker fan Susan C. Mitchell. I got an e-mail on July 31st, 2005 from Susan Mitchell on this very subject. I failed to give her proper acknowledgement for borrowing most of her editorial for use in the Kit Cloudkicker Profile/Editorial. With that in mind I would like to thank Susan C. Mitchell for giving me the inspiration to write this editorial and this website in general for had it not been for Susan; I would never have the guts to create a Kit Cloudkicker Fansite. I would also want to say that I am sorry for not giving her proper credit when it was due originally in 1998 when I wrote the editorial.

And now onto the most important part of this website...... 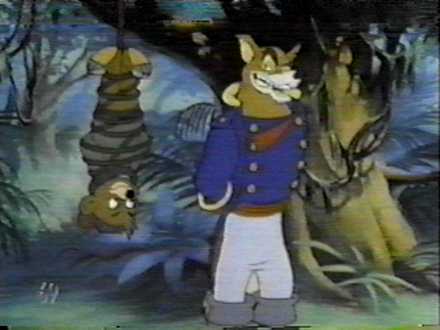 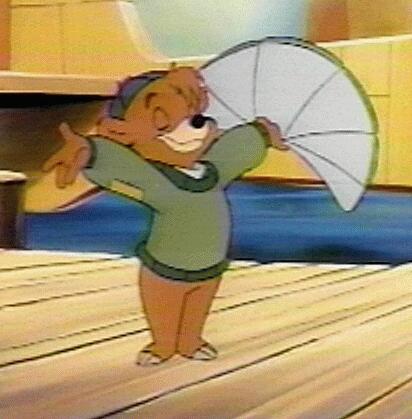 (2015 Gregory Weagle Says: Outside of adding a link, cleaning up and correcting grammar, I'm not changing a thing for this editorial nor commenting on it. It would take 500 KB to add every comment I and other have already said.) The first time I saw Tale Spin back in 1990; I was mildly amused by it. I said to myself: It looks very interesting; however, I always wondered why I actually watched the show in the first place. To be perfectly honest with you; I didn't watch Tale Spin because of the reasons mentioned in my Tale Spin editorial. It was always one character that I can at times relate to. I never thought that Disney could create a character quite like him. A 12-year street kid; an orphan with a level of darkness that traditional Disney simply wouldn't allow but did, and in my humble opinion; THIS was the character that made the difference between a very well done animated series and a series that was beyond belief. The strangest thing about this character is two-fold: He is not the main character in Tale Spin; He's a main support character. Two; he is voiced by two voice talents who are aged 12 (No duh; child voice talent.) and Three; he IS the most complex character in animation. Don't believe me? Read on. 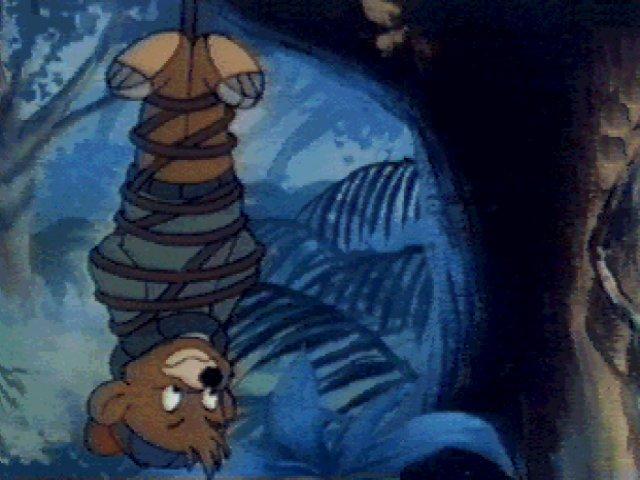 Kit At A Glance

Name: Kit "Cloudkicker"
Possible Names: Kit is techinally the shortname for Christopher. (Although Disney never used Kit's long name at all.)
Age: 12
Height: 3' 9"
Friends: Baloo Bear, Rebecca Cunningham, Molly Cunningham, Louie Lamount, Oscar Vandersnoot, Ernie and the Jungle Aces, WildCat
Rivials: Don Karnage, Mad Dog, Dumptruck, Dan Dawson
Likes: Loves to fly; Loves surfing the clouds using his airfoil (a boomerang-shaped surfboard)
Dislikes: He hates being insulted; people tickling him (The slightest touch really set him off!)
First Quote: "For me? Aw; you shouldn't have!!" : Plunder and Lightning Act I
Most Memoriable Quote: "You can't tell me what to do! You're *Not* my dad!" : Stormy Weather
Fears: Trusting Adults. (Feeling the next adult will stab him in the back! Again!)

Most of the time; he wears a green sweater with some wear and tear (note the patch on his left forearm), and a white shirt underneath (note the white collar above his sweater). Before he met Baloo; I've seen Kit wear a red scarf around his neck, a symbol of him being an Air Pirate. (He was suppose to be Karnage's protoge ) From Plunder and Lightning Act I (12 minutes into the episode); Baloo gives Kit a blue/red baseball cap which he wears backwards.

First Appearance: "I Only Have Ice for You"; Tale Spin Preview Episode on the Disney Channel 05/05/1990.
First National Appearnace: "Plunder and Lightning"; Tale Spin Special TV Movie on CBC/Disney on 09/09/1990. 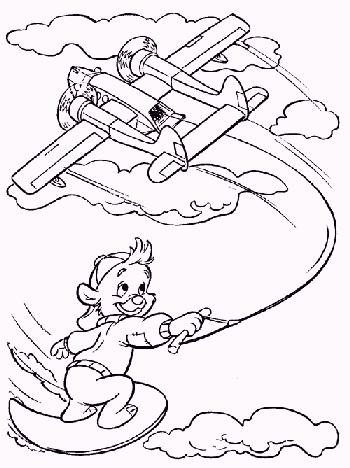 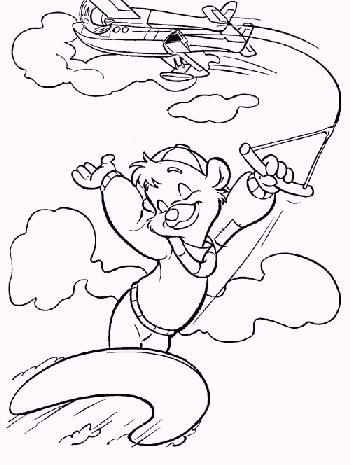 If there is one memoriable thing I remember about Kit Cloudkicker; it's the thrill I get everytime he takes that tow rope from the Sea Duck. Holding on to the tow rope; Kit falls out of the Sea Duck and reaches under his green sweater for a steel; boomerang-shaped board. With a flick of the wrist; the board opens with a click and he places the board under his feet. After he staightens up and begins to bend his knees; the fun really begins. Twisting from side to side; he finds the first cloud and uses the board to basically cut through the cloud. Its called "cloudsurfing" or "cloudskiing" (Dan Dawson- Stormy Weather.) "Cloudsurfing" is basically a cross between water-skiing and sky surfing or for a better term it is actually very close to wave-boarding; expect instead of surfing on water, he surfs on clouds. Kit uses a grey (some artwork I have seen shows it red or cream in color) boomerang-shaped surfboard call an "Airfoil".( One conpect shot showed the airfoil as oval-shaped.) The board is almost as big as Kit is; so in order to easily carry it underneath his sweater, he opens and closes the foil with a simple flick of the wrist. No one knows where he learned how to cloudsurf or even how he got the airboard in the first place. However; the airfoil is more useful than that. Kit can also use the airboard to slow his rate of acceleration during a huge free-fall. (In Tale Spin: Kit has fallen at least 10-20,000 feet; one time without the foil and that he would like to forget.) There is one problem; however, it is hard to control the airboard without the tow rope so he could still hurt himself if he is not careful. Plus the airfoil is not the strongest thing in the world; in at least two episodes someone broke Kit Airfoil (Idol Rich; Plunder and Lightning Part IV); however it seems that no one knows how Kit could have learned how to create the airboard. However; there are a lot of questions people whould like to know about Kit. 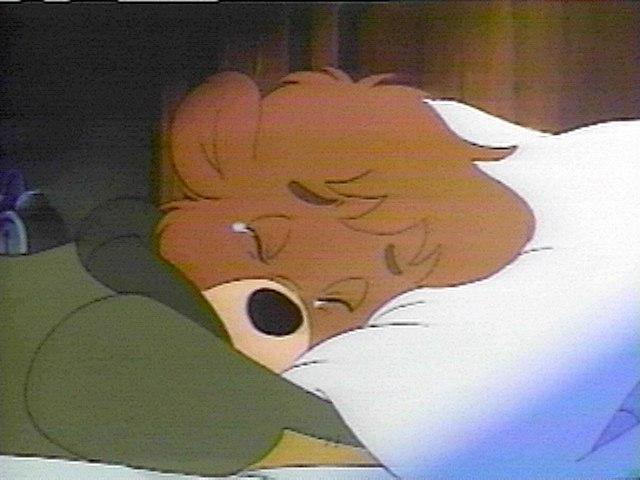 Tale Spin is without a doubt; the #1 animated series in Disney history when it comes to symbolizing characters. Baloo was the symbol of heart and soul. Rebecca was the symbol of the future of women in business. WildCat was the symbol of hard work and enjoying it. Don Karnage was the symbol of evil and a symbol of comedy which was otherwise weak in Tale Spin. (DK is a great character; but that's not the main reason why I love Tale Spin.) Kit Cloudkicker plays a symbol which is very scary and was the only character before Gargoyles that played the symbol known at the "Dark Satrie". It is pretty ironic that Kit is the second cutest character in Tale Spin; (next to Molly of course.) however, that is the outside of Kit. On the inside; this is why I call Kit Cloudkicker Disney's version of "The Prince of Darkness". Kit is basically a free agent: a homeless, parentless child during a time that very few people want to talk about: The Depression; a dark time in the world's history. Kit basically symbolized that and more with the green sweater showing signs of wear and tear and the fact that he has never found a real home. According to Jymn Magon; Kit spend much of his life on his own and much of his life is not only sickening but is a symbol of real life (although Kit is more of an extreme case.). Kit used to sleep under docks, in doorways and in hangers. He basically had to either fight or earn his living to survive; no ones knows how long he's had to do this; but even after meeting Baloo, Kit continued to show that he could take care of himself. He is not a charity case at Higher for Hire and does deal with adults on a adult basis like an adult. That's why Kit doesn't like being referred to as a "Spoiled" brat or even a kid for that matter. However; Kit is not really a sweet person at all; if you get under his skin. (It doesn't take much to do that) He does have a known criminal past, a history with Don Karnage's band of Air Pirates. However; Kit soon discovered this was not the live he wanted to live. I'll never forget Kit words: "I took up with Karnage's gang about a year ago, but I got -- sick of them". This is not the first time that he felt unsure about what he was saying. What was Kit sick of anyway? Being abused? Being the smallest and youngest member of a violent gang? I always wondered that! The very first time was when he mentions his name to Baloo and Rebecca. He gives it as "Kit...Cloudkicker,"; with an odd hesitation and a slightly dubious expression. It was strange to say the least; I began to wonder if Cloudkicker was even his real "last" name. But it is the only name he gives and maybe the only name he has. Sometimes; Kit development as a character comes from outside sources. In "Plunder and Lightning" Part 3; one of the pirates asks Karnage -- speaking of their latest vicitms --" Why'd you let them live?". To me; "Let them live" is not standard protocol. How many death did Kit see? However; I believe the most defining moment in Tale Spin came in the first sence that Kit was in. He was escaping from Don Karange with a box containing the "Sub-Electronic Power Amipifier"; a crystal that creates waves of energy; from the "Iron Vulture" (Another symbol of evil). As he runs through a corridor, he grabs a grappling-hook gun. His expression right then -- a strange, dark, too-mature scowl that was so strange that I almost said to myself: "Finally; a character from Disney with a backbone. This is going to be an interesting character". If Jymn Magon was allowed to get away with it (although he would deny it); I wouldn't have too surprised if Kit put the grappling-hook right through a pirate. He's got such a dark mentially; and if Baloo didn't come to help him, I don't think Kit would have lasted very long.

One final note before we go to Page Two: Note the last name itself "Cloudkicker" has two forms of symbolism in itself; one light and one dark. The "Light" side is one Kit wants you to know about; it talks about him being a cloudsurfer and how he loves having the wind whip through his hair. However; his "Dark" side of the last name is a represention of his past. He keeps trying to kick this dark cloud known as his past away; only until something goes wrong (Rebecca and Molly being kidnapped by the pirates in Plunder & Lightning Part Two), and the cloud comes back stronger than ever and even salts the wound even more. Something to think about. 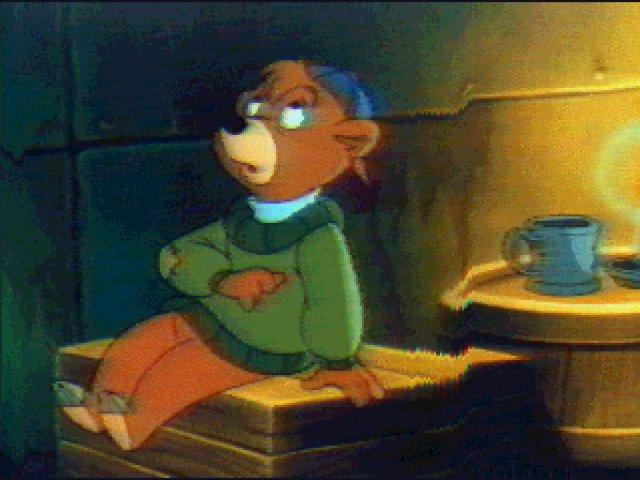 Special Thanks to 50 Webs for providing space for this webpage. Click here to find out how to get your free homepage and 60 Megabytes of webspace!