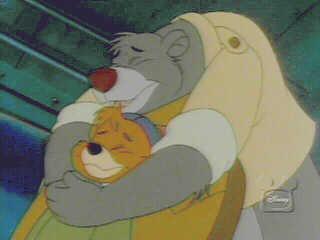 In my thoughts about Tale Spin over the years, I've often stopped to wonder what it was about the show generally, and Kit Cloudkicker specifically, that enraptured me the way it did. There are the obvious elements - the wonderful fantasy world - call it "Usland" or whatever you like - like Messrs. Magon and Zaslove created for Tale Spin. The wonderful, carribean-jazz musical concoction that Christopher Stone created for the series. The marvelously acerbic and somehow still gentle wit that infused, the show, zooming over the heads of the 6-12 year-olds the show was marketed toward ("Be real! Presidents have better things to do than play horseshoes!" - Kit Cloudkicker, "Bearly Alive"; Hello Mr. Bush!). And most of all, the complex, individual and original characters that graced Cape Suzette. Still, it's not the characters themselves that stood out as much as the interactions between them - that's what set Tale Spin apart. Each had a very specific role to play, and they fit into the web of each others lives in unique and individual ways. And, most unique and central to all of those relationships is Kit Cloudkicker.

To me, all one really need to know about Kit is contained in one scene, from part 4 of "Plunder and Lightning". (Still far and away the most remarkable example of storytelling in the history of American TV animation) If you recall, Kit had pretended to betray his new "family" (more on that later) in order to help them escape from Don Karnage. That is, of course, a selfless act in and of itself. But it leads to the true defining moment: Kit, on board the Iron Vulture as Karnage is destroying Cape Suzette with the lightning gun, is horrified by what's going on. Knowing full well he is in all likelihood signing his own death sentence, he decides anyway to try and save the city - donning a rubber glove, he steals Khan's stone from the gun and flees. After leading Karnage's pirates on a merry chase as only he can, he is finally cornered. His last refuge is the radio room. Now, clearly, he knows the game his up. His last thought is to get a message to Baloo. Now here's the real point: Kit tried to get this message out knowing full well that it was not going to save his life.

Kit sent this message knowing that in a matter of minutes the pirates would be breaking down the door and, to his knowledge, doing him in. At this moment of decision, his thoughts were of his best friend - he didn't want Baloo to go through life thinking that Kit had betrayed him! This is a perfect example of Kit's instinctive personality -selfless, empathetic - winning out in moments of crisis. This happens over and over in TS. The fact that Baloo did in fact save him was a complete surprise to Kit - he had no expectation that it would happen.

Kit is essentially a conflicted person. His natural instinct, which surfaces in moments of crisis, is to open himself up to others, to love and be loved. His learned behavior is exactly the opposite - all of those qualities are decided weaknesses in a youngster trying to survive alone in a world of pirates, thugs and insensitive adults. Kit's life at Higher for Hire is essentially a process of "unlearning" his learned personality, and realizing that his natural instincts are actually a positive, that there are those out there who can be trusted and really do give a damn. The first critical moment in this process is the "Home is Where the Heart Is" musical number in part 2 of "Plunder and Lightning" - a scene thoughtlessly edited out by Disney hacks in the syndicated version. Here, Rebecca is singing a lullaby to Molly, and she spots Kit peering in through the window. She goes to the window, opens it and sings another verse directly to Kit - "Remember where my heart is and you'll always have a home" - and leaves a jar of cookies on the sill. (Note, the ever-shrewd Rebecca never actually let's on that she knows Kit is there - that would embarrass him, given his natural defense mechanism. Still, the message is clear.) That was the first opening of Kit's eyes that there were really other kinds of adults out there, and leads him down a path that he was previously afraid to follow. So, where does Kit fit into the web of TaleSpin characters? He is the glue that hold them together. Baloo and Rebecca cannot agree on anything, as a general rule - but the one thing they agree on is Kit. Kit is in many ways the classic mythological young hero. (See Joseph Campbell's "The Power of Myth" for a better explanation of that) The most famous young hero in modern mythology is Luke Skywalker, a creation of George Lucas, a devoted student of Campbell. Thus, the irony in Jymn Magon mentioning Luke Skywalker as a model when Kit's name was chosen - and the parallels don't stop there.

There are many similarities between Luke and Kit, and all of them are classic elements of the hero myth. Both are deprived of their parents at a young age. They each find friends were they least expect to. Who are the influences in young Kit's life? Baloo, the fun loving, free-spirited socially inept pilot prodigy (can you say "Han Solo"?), Rebecca, the sensible, detail oriented play it safe figure (Uncle Owen and Aunt whats-her-name). Each offers Kit something he needs to survive, but each paints an incomplete picture of the world. Like Luke and all heroes, Kit's potential for evil (the dark side) is as great as his potential for good. Kit was confronted with the temptation for despair when he was orphaned and alone. He was confronted by the sensory pleasures of evil doing by his time with Don Karnage and his pirate - what fun for a kid! He eventually would have been tempted by the unemotional wielding of power, a la Shere Khan. (see my fanfic "Khan Heir" - had TS survived the writers would have gotten there, sooner or later.) Every day he lives with Baloo is a temptation to take life easy, and not to achieve his full potential. ("Maybe Kit is cut out for something better than running cargo." - Rebecca, "Stormy Weather") He is tempted by Rebecca's safe and comforting world of chores, making a living and missing the big picture- what street urchin wouldn't feel a craving for that? What Kit lacks in TS is a true mentor - Baloo can teach him to enjoy life, and be a great pilot. Rebecca can teach him discipline. Where Luke had Obi-Wan to guide him, Kit has to put the pieces together himself. Maybe if TS had gone on for as long as it should have, another character would eventually have filled that role. We'll never know.

Which brings me to the final reason I'm still so hung up on this 23 minute cartoon after all this time - unfulfilled potential. As much as I loved TS the first time around (and I did, believe me!), it's that feeling of emptiness, knowing there was so much more that could have been taken from these characters, that leaves the passion still strong. This is a story that should have been told and wasn't given the chance. I think it still bothers Jymn Magon to this day! He knows that this was a beautiful creation, that it had so much more to give, and it was taken from him and snuffed out. That's where the fans come in, I guess - it's that passion to find out what happened, to fill in the blanks, that drives so many of us to keep the memory of the show alive after all these years. Imagine if George Lucas had stopped after "Star Wars" - no sequels. That's what it feels like to a true TS fanatic. And it's a story we'll keep on telling, because the hero myth is truly timeless. There's always another tale to spin.

(2015 Gregory Weagle Says: Outside of formatting and adding stuff for clairty; everything has been kept.) 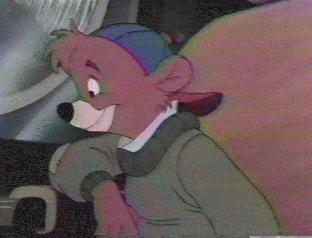 Special thanks to 50 Webs for providing space for this webpage. Click here to find out how you can get your free homepage and 500 Megabytes of webspace.