Kit Cloudkicker on Who Wants to be a Millionaire

Characters: Kit Cloudkicker, Baloo, Wildcat, Rebecca Cunningham, Molly Cunningham are copyright 1990/1991 Walt Disney Company and are being used without premission. The writer has made sure that no money was made in the creation of this fanfic and that all material is used with the upmost affection and respect. Tammy Martinez, Natalie Martinez, Carlos Martinez, David Martinez, Lauren Martinez, and Tammy's relatives are the property of the writer and cannot be used without premission from the writer.

Molly: What is he going to be on?

Rebecca: He’ll be on Who Wants to be a Millionaire.

Baloo turns on the TV.

Announcer: Ladies and Gentlemen, it’s time for Who Wants to be a Millionaire!

Regis comes out and the audience applauds.

Regis: Hello everybody and welcome to the most popular game show, “Who wants to be a Millionaire.” We are ready to start off our game.

Regis: We will play our fastest finger question. To play; each of our 10 contestants will have a question and 4 answers. If any of them puts those answers in the correct order, in the fastest time, will be in our contestant in the hot seat. Here we go!

The 10 contestants including Kit put the answers in order.

Regis: Ok, time is up. Here is the right order, starting from the west. It’s Angels, then Rangers, then Tigers, and finally Yankees. Let’s see who got it right in the fastest time and the winner is, Kit Cloudkicker.

Molly: All right Kit. Get that million.

Kit gets up and goes to Regis.

Regis: Are you ready to get that million.

Kit and Regis sit in the hot seats.

Regis: You have your girlfriend Tammy in the audience. Hello Tammy!

Regis: So, you and Kit go to the same classes, right?

Regis: So Kit, when you that million, what would you do with it?

Kit: Tammy and I would pay off our tuition fee in college.

Regis: That’s great, so you made it to the hot seat. You start off with $100 and going up. If you get to the $1000 or $32,000, you are guaranteed to leave with that much money. You have your lifelines 50:50; which the computer will take away two wrong answers. Ask the audience; which the audience will poll to see if that’s the right answer, and phone a friend, which you call anybody in the country. Are you ready?

Regis: Tammy, are you ready?

Regis: Audience, are you ready?

Regis: All right, let’s play “Who wants to be a Millionaire”

Molly: Here we go, Win it all Kit!

Kit: I watched the Flintstones before and the answer is C) Wilma.

Regis: You are correct.

Regis: For $300, Which of these is not a time zone of the continental US? A) Pacific B) Eastern C) Midwest D) Mountain

Kit: The answer is C) Midwest.

Regis: You got it!

Regis: For $500, By what name are the Academy Awards also known? A) Oscars B) Globes C) Emmys D) Tonys

Kit: They give out in the Academy Awards is A) Oscars.

Regis: For $1000, What do the fifty stars on the flag of the United States represent? A) Stars B) Indian Tribes C) Pilgrim Fathers D) Presidents

Kit: The stars represent A) Stars.

Rebecca: He’s off to a great start!

Regis: For $2000, Who portrayed the character “The Fonz” on the television series “Happy Days” A) Ron Howard B) Henry Winkler C) John Travolta D) Tom Bosley

Kit: Let’s see, Ron Howard is Richie Cunningham. C and D are not from Happy Days. The answer is B) Henry Winkler.

Regis: You got 2000 and here’s the $4000 question, Who created the cartoon series “The Simpsons”? A) Charles Schulz B) Matt Groening C) Walt Disney D) Tracey Ullman

Regis: You good at this, 8 questions to go. Here’s the $8000 question. What was the baseball player Babe Ruth’s actual first name? A) George B) Herman C) Francis D) Douglas

Kit: This one is easy, the answer is A) George.

Regis: Is that your final answer?

Regis: That is right!

Kit: I played this game before and the answer is B) 4.

Regis: You are absolutely correct!

Regis: Here’s the $32,000 question, Who was the 22nd and 24th President of the United States? A) Benjamin Harrison B) Grover Cleveland C) Chester Arthur D) James Garfield

Kit: I heard that there is only one president who got elected twice, but not the 23rd, the answer is B) Grover Cleveland.

Regis: Make it your final answer?

Rebecca: I hope he can get it.

Regis: For $64,000, Which cartoon character called himself the “roughest, toughest hombre in the west”? A) Tasmanian Devil B) Yosemite Sam C) Deputy Dawg D) Elmer Fudd

Kit: One of my favorite characters is B) Yosemite Sam.

Regis: You want one of your favorite Looney Toon characters your final answer?

Regis: You got it right!

Regis: You still have the 3 lifelines. We are going for $125,000; here it is, What are the two official languages of the Olympic Movement? A) French and German B) French and English C) French and Spanish D) French and Italian

Regis: Ok audience, I want you use that keypad and press the A B C and D buttons and vote now.

Kit: I was thinking about it too. So, I will go with the audience and say B) French and English.

Regis: They are all correct!

Regis: You got it!

Kit: He’s a friend of mine.

Regis: Ok, let’s get Baloo on the line.

Phone rings at Higher for Hire. Baloo picks it up.

Baloo: Hey Regis! How are you?

Regis: I’m good and you.

Regis: In a moment, Kit will ask you a question and 4 possible answers. Kit it’s all yours, you have 30 seconds and it starts now.

Kit: Are you sure?

Buzzer sounds and Baloo hangs up the phone.

Regis: You want it your final answer?

Regis: You are right!

The lights go out except Regis, Kit in the hot seat and Tammy in the audience.

Regis: Good luck, here the 1 million dollar question. Which punctuation mark is also the name for the currency of Costa Rica and El Salvador? A) Period B) Apostrophe C) Comma D) Colon

Rebecca: You can do it.

Kit: (thinks hard) I know it’s not A and B. It’s between C and D. (thinks hard) If I get it right, I can pay my college fee for my girlfriend and myself. I’ll take my final guess and say D) Colon.

Regis: For the last time, I will say this, is that your final answer?

(Answer lights up and waits a few seconds)

Regis: I really have to say this.

Tammy runs to Kit, and then she hugs and kisses him. The confetti comes down on the stage. They walk out of the stage.

Kit and Tammy go in the door.

Kit: Well, look at this.

They celebrate with Kit.

Kit: Sure, I’d like to end this with a kiss.

Kit kisses Tammy on the lips and hugs her at the same time. 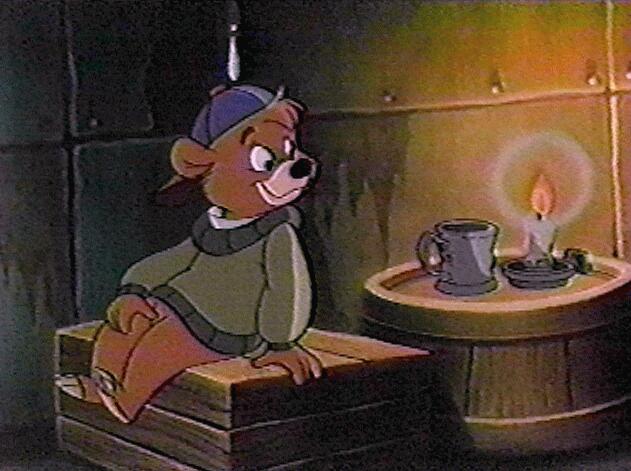 Return to Kit Cloudkicker Fan Fics
Return to the Unofficial Kit Cloudkicker Homepage
Special thanks to 50 Webs for providing space for this webpage. Click here to find out how you can get your free homepage and 60 Megabytes of webspace.