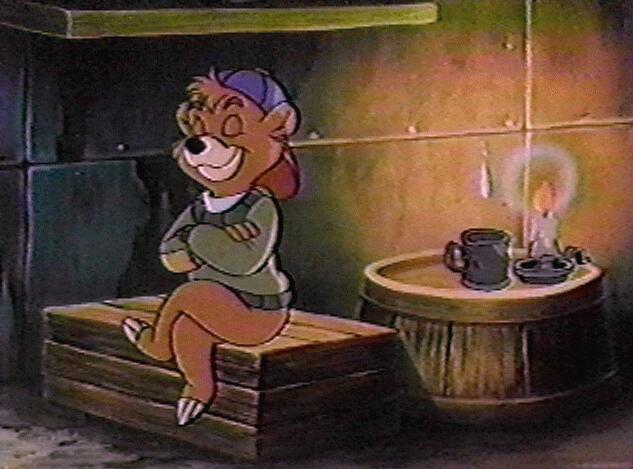 TaleSpin's Whose Line Is It Anyway?

Characters: Kit Cloudkicker, Baloo, Wildcat, Rebecca Cunningham, Molly Cunningham are copyright 1990/1991 Walt Disney Company and are being used without premission. The writer has made sure that no money was made in the creation of this fanfic and that all material is used with the upmost affection and respect. Tammy Martinez, Natalie Martinez, Carlos Martinez, David Martinez, Lauren Martinez, and Tammy's relatives are the property of the writer and cannot be used without premission from the writer.

Editors Note: Contains unconvential humor. Read at your own risk since it is in play-type format...

The Whose Line Is It Anyway theme song plays. The crowd applauds.

Drew Carey: Welcome to Whose line is it anyway? The show that makes you want to fly out of the Sea Duck. Featuring tonight, he’s wearing blue all over so he can be Mr. Fix it Wildcat. He is a teenager wearing blue jeans, a red hooded sweater and a white cap backwards like he’s cool with his bleach blonde hair Kit Cloudkicker. She’s wearing black pants and a white and becomes the boss Rebecca Cunningham. He’s large and in charge wearing his pilot gold shirt Baloo. These are your contestants.

Drew: We will start off a game called “Film and Theater Styles”, it will feature Kit and Rebecca will come down and do a film style, what do you think they should be in audience?

Drew: The Soaps, anyone else?

Drew: Ok, you two are in a park walking together. After you do the talking, I’ll add the styles to that scene, go ahead.

Rebecca: So, did you win?

Rebecca: You struck out? I don’t want to talk to you. You make me sick! You’re in a slump!

Kit: Now I own this park, gimme all your money. (Points with two fingers like a gun. Rebecca raises her arms) Show me the moolah.

Rebecca: Not in the OK corral park!

Kit: I need to see that dough.

Kit: Oh my God, these trees are moving, what are we going to do?

Rebecca: let’s run! (Pretends to run away from moving trees)

Kit: Holy Cape Suzette, what are we going to do Batman, I mean Batwoman?

Rebecca: Let’s open a can on them. (Pretends to fight)

Drew: Let’s end it with Mickey and Minnie!

Kit: (light voice) Let’s get Goofy and Donald Duck so we can blow this park into smithereens.

Kit and Rebecca take their seats.

Drew: Next, we go to a game called “Scenes from a hat”, it features all 4 of you. Come on down. In this hat are the audience suggestions what you will do. The first one is “Dropping a Contact Lens in a bubble bath”.

Rebecca sits on the step as a bath, Kit comes over

Kit: Oh no, I drop my contact lens! (Baloo and Wildcat comes over finds it)

Drew: Let’s try “Getting exhausted after a marathon”

Kit: Tired! (Falls to the floor)

Baloo: (pretends to swing and miss the ball and falls) Did I hit that?

Wildcat: There it goes!

Drew: How about “Stooges in a restaurant”!

Kit: I ordered onion and pepperoni, not pepperoni and sausage.

Rebecca: Take that and that!

They take their seats

Drew: Ha ha, good one guys, thank you, now we go on to a game called “Standing, Sitting, Bending” which features Kit, Rebecca, and Wildcat. There two chairs here, one of you must be seated, one of you must be standing, and one of you must be bending over. After a few seconds you can start changing around. The scene is you’re in a bowling alley discussing strategy. Let’s begin!

Kit: I have a way to score a strike!

Kit: All you do is roll down the middle and knock the pins.

Rebecca: Let me see that.

Rebecca: I don’t see anything.

Rebecca: I didn’t know that!

Rebecca: And there are no pins anyway!

Baloo: Welcome to my rat hole, would you like to come in? (Wildcat goes in the hole)

Rebecca: (as a merry-go-round) are we having fun Kit?

Wildcat: Welcome to McDonalds, can I take your order?

Kit: (as a toy winder) here we go! (Rebecca walks like a toy)

Rebecca: Introducing the garden weasel (Pretends to dig with that)

Kit: Here comes the ski lift! (The item comes to them and pretends to sit on it)

Drew: Thank you, I’ll take those!

They take their seats.

Drew: Now we go to a game called “World’s Worst”, it features all 4 of you. Stand on the steps. You will act out the world’s worst person to sit next to in college.

Kit: What time is this over?

Kit: Can you repeat the question?

Kit: Is this History or Government?

Baloo: Why am I flunked at this Math test?

Drew: All right, good one you guys, you receive a million points. (Contestants take their seats) Let’s go on to a game called “Helping Hands” it features Baloo and Rebecca, there are some props on the table and Wildcat will provide the hands.

Drew: This scene is you’re in a pizza parlor and Rebecca is the customer and you are the chef. Let’s begin!

Baloo: Yeah, you really come to the right place! (Finds the dough and the roller) (Speaks fast) I gotta handful of dough and I don’t have any money! We roll the dough (rolls the dough unflat) There’s your dough right here, now we grab sauce.

Baloo: (opens the lid and throws it away) There you go, (pours all the sauce on the pizza and splashes on Rebecca and Baloo) It’s the big kahuna.

Rebecca: I’m all wet! Here put cheese on them, (spreads cheese on pizza)

Baloo: (snatches cheese from Rebecca and eats some) oh these are good!

Rebecca: (angry) Baloo, those belong on the pizza!

Baloo: Ok, (puts pizza on the face) there’s your pizza!

Drew: (laughing his head off) excellent you guys, that gives you and zillion points there. Let’s go to a game called “Party Quirks”. It features Baloo as the host of the party, the others are guests of the party and they have ways of behaving in the party. Baloo must guess who it is. You three stand there and I’ll ring the doorbell, go ahead.

Baloo: (on the phone mad) No no, I ordered 50 kracatoa specials, goodbye! (Hangs up) What a moron.

Wildcat: GRRRRRRR, GRRRRR (goes to the audience and grabs a woman) GRRRR, You want some of this?

Baloo: What’s going on, are you Godzilla?

Kit: (on all fours) hey, where’s the Puppy Chow.

Baloo: Yes over there.

Has a crush on the host of the party

Rebecca: Hello, I… oh you stud muffin, the biggest man I ever saw. (goes around him)

Baloo: Hey you have a crush on me!

Baloo: Put her down you King Kong wanna be!

Baloo: Who are you?

Drew: Oh my, I’ll give you 10 million points on that. Let’s go to a game called “Hoe-down” It features all 4 of you, you will sing in a hoe-down with the assistant of the piano man. Give me suggestion audience of a TV show hoe-down.

Piano man plays the Hoe-down. The audience claps along during the song.

Wildcat: (singing) I starred in Talespin. I am Mr. Fix it!

I hate working on the sea duck cause it’s really hard.

I work for Higher for Hire, and I get a lot of money.

So give a lot of dough cause repairing really sucks!

Kit: (singing) I really like to cloud surf, right up in the sky.

When the air pirates came to me, I really knocked them dead.

I hated those pirates cause they make me sick.

When Karnage came to me, I kicked his butt!

Rebecca: (singing) When I joined Talespin, I am the boss.

When I told Baloo to move the cargo, he goes to sleep.

Then I grabbed a clipboard and then I pinched his butt.

He really really makes me sick cause I said so!

Baloo: (singing) I am the pilot and I really like to fly.

I take my Sea Duck to a restaurant called Louie’s.

I order a krackatoa when the air pirates came in.

Karny makes me sick and he should go home!

Crowd gives them a standing ovation.

Drew: All right, that was a fun game, now I total up the points, and the winners are Rebecca Cunningham and Kit Cloudkicker.

Drew: Now, we will end this show with all 4 of you reading the Talespin Credits in the style of my choosing. Act out as four sports commentators. I like to thank Wildcat, Kit, Rebecca, and Baloo. I’m Drew Carey, Goodnight!

TALESPIN WHOSE LINE IS IT ANYWAY?

Characters and Voices of

Rebecca: Marty Warner, give him a tennis racket.

Wildcat: Paul Felix and Derek Carter for the championship.

Return to Kit Cloudkicker Fan Fics
Return to the Unofficial Kit Cloudkicker Homepage
Special thanks to 50 Webs for providing space for this webpage. Click here to find out how you can get your free homepage and 60 Megabytes of webspace.